From 9.8 million outbound travellers in 2007 to 22.5 million in 2017, India has become one of the fastest growing outbound markets of the world. While on a holiday an Indian traveller spends an average of USD 1000 and a total expenditure of USD 16.8 billion has been incurred by Indians in 2016 which makes them the second biggest spenders of the world.

Increasing disposable income, reduction in the cost of international airfares, availability of affordable packages and the rise in low cost carriers are the key factors that have resulted to this growth.

India’s population is 1.3 billion and it’s interesting to note that only 1.5 % of the total population is traveling and that’s nanoscopic. This market is not yet fully explored because of the size, diversity and complexity. It still remains unstructured as the travel business is made of wholesalers, retailers, online travel agencies, mom and pop travel agents. Some of them focus on a specific region or a segment like Honeymooners, Adventure, Religious tourism while others focus on luxury or MICE.

Being fully aware of this huge potential, around 70 NTOs (National Tourism Office)have their local presence in India

How can we help?

We can provide custom-made services designed to meet organizational needs, with the objective of creating strong brand awareness and increasing return on their investments. 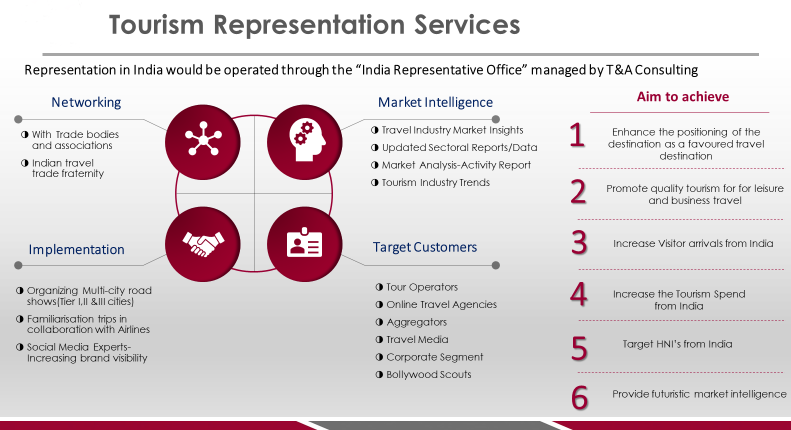 With our extensive experience in recruitments, we not only provide assistance in search and appointment of candidates, but also provide benchmarking on compensation structures enabling effective HR policies.